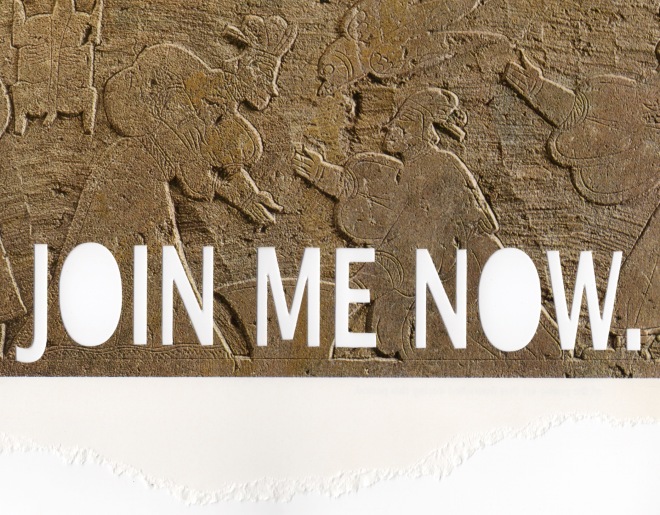 as we face a global refugee crisis, with almost 70 million people displaced from their homes, small moments of willful inclusion are feeling so powerful to me. JOIN ME NOW brings together a collection of artists who, for one short summer, worked on their own and each other’s videos. sharing works in progress and hearing diverse opinions about the work…about all the things the work brought up for these different people. it is a joining. not one in which consensus is sought but simply one that sees and hears and learns about difference, shares insight about art and life, breaks down barriers, is pushed around, reshaped and unshaped. a joining of intention and purpose. the generosity of joining and inviting others to join feels cinematic, political and utopian to me. i’m so thankful to have been part of this expansive process.

Join Me Now is a collection of video works by seven artists developed during the 2018 summer session of the Image Text MFA program at Ithaca College, Ithaca, NY in a seminar taught by Stephanie Barber. The program was first screened on July 13, 2018 at Ithaca College.

We are excited to present a digital screening of the program in conjunction with the release of Join Me Now on both DVD and VHS, which are available in our store.

A Portrait of the Artist, Traveling through Space- Kelsey Sucena

*This piece is a VR work, and is best viewed through a VR headset. It can also be experienced on mobile phone by moving the phone, and on laptop/PC by manipulating the video screen with the mouse.

I Had this Dream- Justin Audet

* Quoted text appearing in video is borrowed from Close to the Knives: A Memoir of Disintegration by David Wojnarowicz (Vintage Books, 1991)

(a video recording of myself repeating the words of my grandfather Espedito in the last audio recording I have of him before his death, and as I came to realize during the exercise also the occasion to our last goodbye.)- Hugo Gallo

KELSEY SUCENA (b. 1994, Honolulu) is a New York based photographer, poet, and park ranger currently residing on Long Island. Their work is based at the intersection of photography and poetry, exploring concepts of identity, impermanence, and language, to investigate the existential nature of documenting life. Kelsey is a fellow at Image Text Ithaca and is currently an Editorial work scholar at Aperture Foundation. JUSTIN AUDET was born in 1984 in Pittsburgh, graduated from the Image Text Ithaca MFA program in 2018, worked in the Caucuses for several months and lives in Philadelphia. JASON LIPELES is a human being with feelings. MARTHA ORMISTON (b. Rochester, NY) is a woman, writer, photographer and video artist whose work has been exhibited internationally. She received an MFA from the Image Text program out of Ithaca College in Ithaca, NY, and is based —at the time of this writing—in New York City, where she makes a living as a graphic designer. JANET SOLVAL is an artist living and working in Los Angeles. She is currently in the Image Text MFA Program at Ithaca College. Janet investigates the world through photography, both digital and analog, as well as correspondence, video, and other media. MATT BACZEWSKI is an artist living and working in the Binghamton, NY area, working primarily in sound, video and text. He is an MFA candidate in the Image Text Ithaca program, and co-founder of Naan cül Press. HUGO GALLO is a Brazilian artist developing work mainly as a filmmaker, actor/performer, and writer. His work is often concerned with themes such as emotion, memory, and language in the development of individual and collective identity. Hugo holds a BFA in Film, Photography and Visual Arts, and is currently an MFA candidate in the Image Text program at Ithaca College. STEPHANIE BARBER is an American writer and artist. She has created a poetic, conceptual and philosophical body of work in a variety of media. Her videos are concerned with the content, musicality and experiential qualities of language and her language is concerned with the emotional impact of moments and ideas. Each ferry viewers through philosophical inquiry with the unexpected oars of empathy, play, story and humor.

Thank you to Stephanie Barber for teaching the Image and Text Through Time seminar, and for pushing the artists to consistenly challenge themselves.